"We’ll have an economy based on wind.  I never understood wind.  You know, I know windmills very much.  I’ve studied it better than anybody I know.  It’s very expensive.  They’re made in China and Germany mostly — very few made here, almost none.  But they’re manufactured tremendous — if you’re into this — tremendous fumes.  Gases are spewing into the atmosphere.  You know we have a world, right?  So the world is tiny compared to the universe.  So tremendous, tremendous amount of fumes and everything.  You talk about the carbon footprint — fumes are spewing into the air.  Right?  Spewing.  Whether it’s in China, Germany, it’s going into the air.  It’s our air, their air, everything — right?
So they make these things and then they put them up.  And if you own a house within vision of some of these monsters, your house is worth 50 percent of the price.  They’re noisy.  They kill the birds.  You want to see a bird graveyard?  You just go.  Take a look.  A bird graveyard.  Go under a windmill someday.  You’ll see more birds than you’ve ever seen ever in your life.  (Laughter.)
You know, in California, they were killing the bald eagle.  If you shoot a bald eagle, they want to put you in jail for 10 years.  A windmill will kill many bald eagles.  It’s true.
And you know what?  After a certain number, they make you turn the windmill off.  That’s true, by the way.  This is — they make you turn it off after you — and yet, if you killed one they put you in jail.  That’s okay.  But why is it okay for these windmills to destroy the bird population?  And that’s what they’re doing.
I’ll tell you another thing about windmills.  And I’m not — look, I like all forms of energy.  And I think (inaudible) — really, they’re okay in industrial areas.  Like you have an industrial plant, you put up a windmill — you know, et cetera, et cetera.
I’ve seen the most beautiful fields, farms, fields — most gorgeous things you’ve ever seen, and then you have these ugly things going up.  And sometimes they’re made by different companies.  You know, I’m like a perfectionist; I really built good stuff.  And so you’ll see like a few windmills made by one company: General Electric.  And then you’ll see a few made by Siemens, and you’ll see a few made by some other guy that doesn’t have 10 cents, so it looks like a — so you see all these windows, they’re all different shades of color.  They’re like sort of white, but one is like an orange-white.  (Laughter.)  It’s my favorite color: orange.  (Applause.)
No, but — and you see these magnificent fields, and they’re owned — and you know what they don’t tell you about windmills?  After 10 years, they look like hell.  You know, they start to get tired, old.  You got to replace them.  A lot of times, people don’t replace them.  They need massive subsidy from the government in order to make it.  It’s really a terrible thing.
And what they want to do is they want to get rid of all petroleum product.  That means you basically won’t have any factories in the United States.
So tell me though, how are you going to win Texas when you say, “We’re going to get rid of all petroleum,” right?"  (Applause)...

Uhhh... You do know that wind energy is actually solar energy? 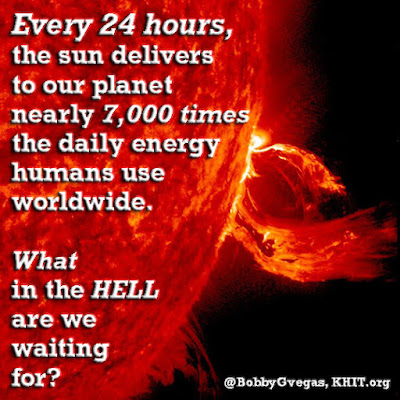