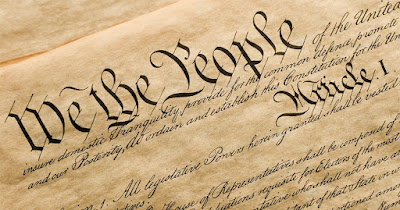 Article II, Section 1
____
Subsection/Clause 2 is the focus of the "Independent State Legislatures Doctrine." Sixteen "shall" directives and one (curious) "may." Notably absent is any constitutional language authorizing a state to set (or rescind) an election's procedures post hoc—once an election result is known and Electors' tallies have been submitted to Congress. Are we to believe the Framers intended to provide state legislatures carte blanche? "Original Intent / Textualism" is no help here.

This once-obscure theory — known as the Independent State Legislatures doctrine — had been a stealth effort in right-wing legal circles. But recent election-related litigation in state supreme courts and the federal courts, much of it related to the "Big Lie," has accelerated its prominence and highlighted its dangers.
Here's what the Independent State Legislature doctrine argues: The U.S. Constitution gives state legislatures the sole authority to set all election rules — including the assigning of Electoral College votes — independently, and immune from judicial review. Taken to its natural extreme, it holds that election laws set by state legislatures supersede any rights guaranteed in state constitutions or even initiatives passed by voters. It effectively concludes that there can be no possible checks and balances on state legislatures' authority when it comes to election law.

Yesh, but "immune from judicial review" implies that even SCOTUS has no standing in this regard.** OK: ARTICLE III, Section 2: In all cases affecting Ambassadors, other public Ministers and Consuls, and those in which a State shall be Party, the supreme Court shall have original Jurisdiction.
The 2020 election is lawfully concluded. All 50 states had certified prior to January 6th, in the wake of dozens of fruitless challenges in "battleground" states. 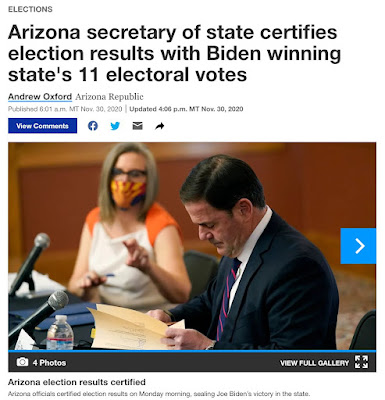 States' legislative authority with respect to future election processes (in advance of them) is a separate issue. But, you don't get a Mulligan once your state has Certified but you are miffed at the outcome. You Snooze, You Lose.


** The right of citizens "to vote" (exact words) is explicitly set forth in the 14th, 16th 19th, 24th, and 26th Amendments. I'm not buyin' that SCOTUS could not act to strike down any states' legislative enactments that abrogated it. Seriously? Uhhh... ARTICLE III, Section 2, anyone?

“Each State shall appoint, in such Manner as the Legislature thereof may direct, a Number of Electors…”
"In such Manner" that otherwise comports with the "supreme Law of the Land."

'eh?
NONETHELESS
SCOTUS now has a 6-3 "conservative" majority, four of whom—Justices Alito, Gorsuch, Kavanaugh, and Thomas—have already expressed affinity for the "Independent Legislatures" concept. So, we could perhaps see an eventual 5-4 vote in its favor should they opt to take it up.
"The Rule of Five."
UPDATE: THE "EASTMAN MEMO"
After the November 3rd election, "White House lawyer" John Eastman circulated a 6-pg "confidential memo" (pdf) articulating his proposed process for overturning the apparent Biden win and re-installing Donald Trump for a second term summarily. It begins and ends thus:

Article II, § 1, cl. 2 of the U.S. Constitution assigns to the legislatures of the states the plenary power to determine the manner for choosing presidential electors. Modernly, that is done via statutes that establish the procedures pursuant to which an election must be conducted.

…The fact is that the Constitution assigns this power [to decide a presidential election] to the Vice President as the ultimate arbiter. We should take all of our actions with that in mind. [And, never mind the otherwise “plenary power“ of the states.]

… I have outlined the likely results of each of the above scenarios, but I should also point out that we are facing a constitutional crisis much bigger than the winner of this particular election. If the illegality and fraud that demonstrably occurred here is allowed to stand—and the Supreme Court has signaled unmistakably that it will not do anything about it—then the sovereign people no longer control the direction of their government, and we will have ceased to be a self-governing people. The stakes could not be higher.

It's worth yet again noting that “illegality and fraud,“ while asserted ad nauseum to have been "demonstrable," were never confirmed, notwithstanding protracted, withering scrutiny—inclusive of more than 60 failed court challenges.

"The Supreme Court has signaled unmistakably that it will not do anything about it." But, but, but... oh, never mind—"ultimate arbiter," anyone? Was not the VP's action "arbitration?" C'mon. Pence was the "ultimate arbiter" until he was not? 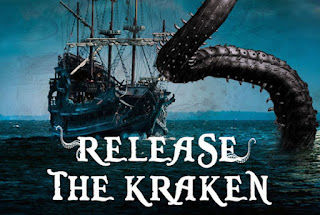 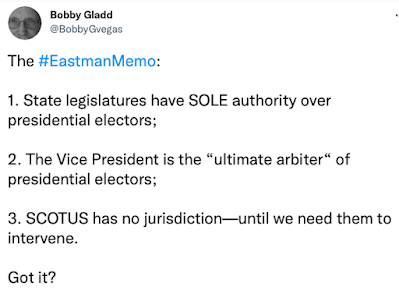 This is what passes for constitutional analytic sophistication at the Claremont Institute these days.
GAME, SET, AND MATCH,
JEREMY B. ROSEN, ESQ (FEDERALIST SOCIETY):

[John Eastman] “prepared a six-page memo for Pence, arguing that Pence had broad powers to stop the Electoral College–vote counting in the Senate. Eastman asserted that the vice president had the authority under the Twelfth Amendment to determine on his own which Electoral College votes were valid and to count only those, thus giving the election to Trump. This theory does not hold up to basic scrutiny. Applying originalism to interpret the Twelfth Amendment, Derek Muller, a professor at the University of Iowa and a prominent conservative election lawyer, explains that the vice president lacks any authority other than to announce the votes that have already been counted by Congress. Indeed, in 2000, Eastman himself argued that Vice President Al Gore did not have power over the counting, because only both houses of Congress possess such authority. If Gore lacked the power to challenge the counting of Electoral College votes he disputed to deprive then-Governor Bush of the presidency, so too did Pence with regard to Trump.” 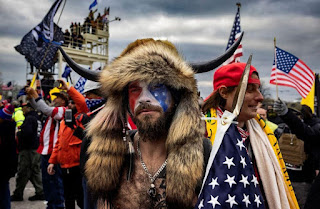 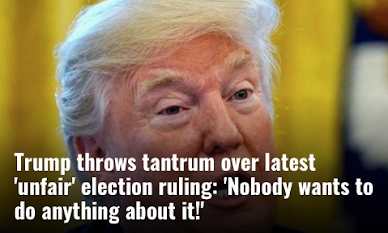 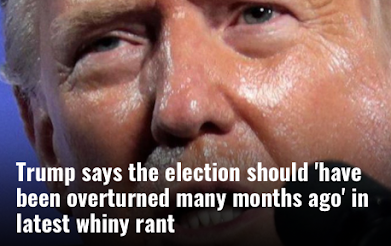 "Why isn't the January 6th Unselect Committee of partisan hacks studying the massive Presidential Election Fraud, which took place on November 3rd and was the reason that hundreds of thousands of people went to Washington to protest on January 6th?" Trump asked, even though his claims of fraud were long ago debunked.

"Look at the numbers now being reported on the fraud, which we now call the 'Really Big Lie.' You cannot study January 6th without studying the reason it happened, November 3rd," Trump argued, attempting to claim that those debunking his lies are the ones actually lying.

"But the Democrats don't want to do that because they know what took place on Election Day in the Swing States, and beyond. If we had an honest media this Election would have been overturned many months ago, but our media is almost as corrupt as our political system!" Trump argued, though even Fox News has accurately reported Trump lost the election. 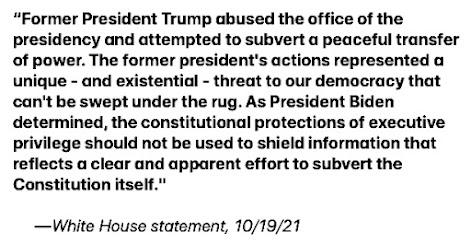 As Vice President Mike Pence hid from a marauding mob during the Jan. 6 invasion of the Capitol, an attorney for President Donald Trump emailed a top Pence aide to say that Pence had caused the violence by refusing to block certification of Trump’s election loss.

The attorney, John C. Eastman, also continued to press for Pence to act even after Trump’s supporters had trampled through the Capitol — an attack the Pence aide, Greg Jacob, had described as a “siege” in their email exchange.

“The ‘siege’ is because YOU and your boss did not do what was necessary to allow this to be aired in a public way so that the American people can see for themselves what happened,” Eastman wrote to Jacob, referring to Trump’s claims of voter fraud…

‘A roadmap for a coup’: inside Trump’s plot to steal the presidency

UPDATE
Wikipedia to John Eastman: "We are out of fucks to give."

In a world of inequality, we are well accustomed to rich, powerful, connected people getting preferential treatment, whether a good table at a restaurant, admission to a selective college for their offspring or a torn-up speeding ticket. Despite its countercultural tendencies, the digital world has wound up in a quite similar place. On large platforms like YouTube, Twitter and Facebook, the most important, newsworthy users are given VIP treatment. Their voices are amplified; their misdeeds are excused; they are, up to a point (see: Trump), freed from the automated policing that the rest of us have to endure. The notable exception is Wikipedia. There, VIPs have been shouting “Do you have any idea who you are dealing with?!” for years, only to be told either, not really, or, don’t care, and then instructed, as Eastman was, to take their objections to a Talk page where the community can weigh in… 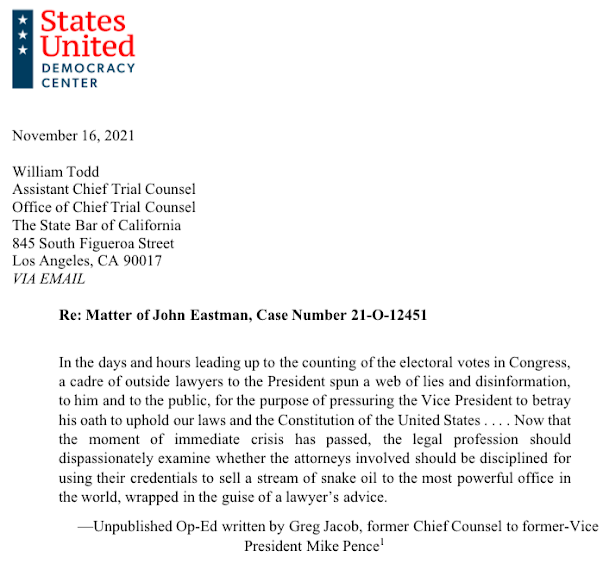 Abstract: In this essay, and in light of the controversy that arose in the wake of the 2020 presidential election, we explain the constitutional process for counting electoral votes. In short, every four years, the Twelfth Amendment requires the President of the Senate (usually the Vice President of the United States) to open certificates provided by state presidential electors and count the votes contained therein. The Constitution allows no role for Congress in this process, and thus, the provisions of the Electoral Count Act purporting to grant Congress the power, by concurrent resolution, to reject a state’s electoral votes, is unconstitutional. Further, the objections raised to two states’ electoral votes on January 6, 2021, were not proper within the terms of the Act, and therefore, even if Congress has the power specified in the Act, congressional action rejecting states’ electoral votes would have been contrary to law. While state executive or state judicially-ordered departures from the requirements of state election laws in presidential elections might violate the federal Constitution’s requirement that electors be chosen as specified by state legislatures, determining whether this has taken place is much more complicated than simply examining the language of state election statutes. We suggest that making this determination requires a careful examination of state interpretation traditions that we decline to undertake in this brief essay on the constitutional process for counting electoral votes.

Again, you don't get a Mulligan when you don't like the presidential election outcome but can't prove outcome-changing fraud (particularly in light of the myriad administrative, legislative, and judicial reviews comprising the 2020 election challenges).
________
IMPORTANT UPDATE, DEC 2021 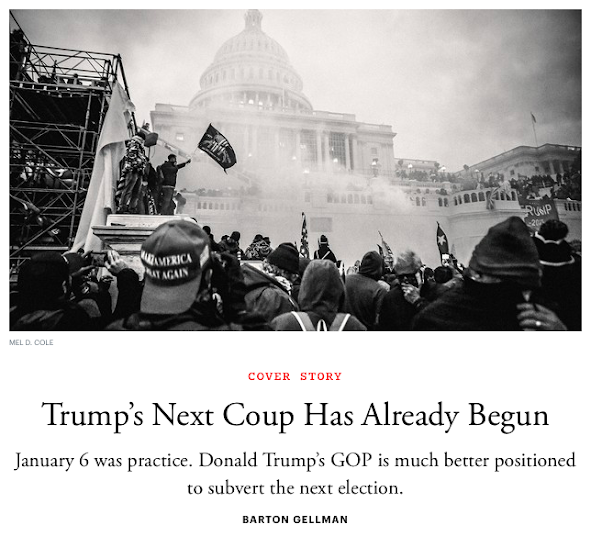 Read all of it carefully.
JANUARY 2022 UPDATE
From the conservative Bulwark.

Trump's Electoral Forgery/Fraud: The smoking guns are all around us 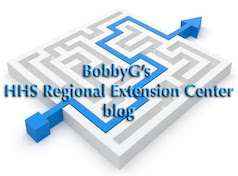 An independent blog, now at KHIT.org