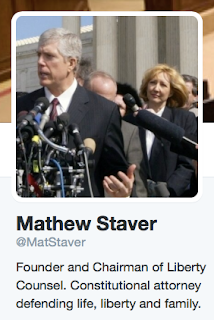 “FIVE UNELECTED JUDGES” and the spectre of “HITLER’S DEATH CHAMBERS"

I am always amused (albeit rather irascibly so) by the maudlin Irony-Free Zone spectacle of “social conservative” Wingnuttia, with their legions of Perpetually Indignant news camera-loving lawyers racing off to the courts at the drop of a bigot’s bleat or besmirched Bible verse, their fine leather valises bulging at the clasps with myriad War and Peace-length amicus “briefs” purporting to drill down into the ostensibly inscrutable import of the placement of a comma, or the presence of the conjunctive “and,” or the plain text meaning of a Constitutional clause or expression of "legislative intent."

Two summary observations: [1] It necessarily follows that doing so validates the due process legitimacy of the Judiciary as a component of lawful governance. All part of the “checks and balances” system we otherwise take pains to laud when it suits us.

In an adult world, you don’t get to come out to the press conference mics in the wake of an adverse decision to pound the lectern and stammer on poignantly about the “Judicial Tyranny” of X number of "Unelected Judges,” adolescently invoking the apparition of Adolf for icing on the toxic red herring rhetorical cake for inflammatory, dog-whistling media effect.

You win some, you lose some. Deal with it. Libeling the judiciary via the Hitler Card is not dealing with it.

[2] Notwithstanding that it’s tiresome to have to keep pointing this out, ours is predominantly a federated “representative democracy” — a “republic.” We do not, in the main, govern by the plebiscite du jour. We elect and appoint people to vote and govern in our proxy, with concomitant provisions for their removal from office should they fail us egregiously. You can in fact “throw the bums out” should the need and sufficient body politic impetus obtain.

Moreover, as it pertains to those having been “appointed” to their offices — specifically our federal jurists apropos of this argument, they too have typically been vetted via multistage recursive majority vote proceedings, all the way from local bar association nominating committees to state bars to the ABA and finally, to Senate Judiciary Committees, ultimately culminating in the majority confirmation vote of a full Senate. Once confirmed and sworn, our jurists go on to decide and rule by (proxy) majority vote.

That this basic element of iterative majority-rule representative democracy escapes the gullible and willing prey of the demagogue and the political grifter in no way nullifies its lawful propriety and necessity. People need to grow up. You head to court, by that act you are making the statement that the court is legit. You don’t get to disavow that affirmation post hoc when a venue-specific lawful majority outcome is not to your liking.

Notice how the complaint is always voiced against "Five Unelected Judges." Not "nine." Opprobrium only goes to those who vote in ways you don't like.

From a Fox News segment in which Fox legal analysts wholeheartedly derided the claims made by the "Liberty Counsel" attorneys regarding their now-jailed-for-Contempt Kentucky marriage equality scofflaw client Kim Davis. 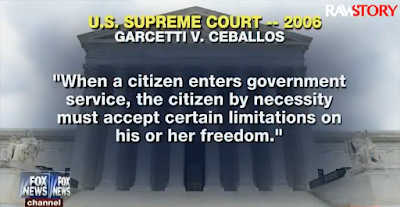 When you've even lost Fox, you know your schtick has no merit.

With respect to the controlling SCOTUS merits of the Kim Davis debacle:


SUPREME COURT OF THE UNITED STATES
GIL GARCETTI, et al., PETITIONERS v. RICHARD
CEBALLOS
[May 30, 2006]
on writ of certiorari to the united states court of appeals for the ninth circuit Justice Kennedy delivered the opinion of the Court.
It is well settled that “a State cannot condition public employment on a basis that infringes the employee’s constitutionally protected interest in freedom of expression.” Connick v. Myers, 461 U. S. 138, 142 (1983) . The question presented by the instant case is whether the First Amendment protects a government employee from discipline based on speech made pursuant to the employee’s official duties...

When a citizen enters government service, the citizen by necessity must accept certain limitations on his or her freedom. See, e.g., Waters v. Churchill, 511 U. S. 661, 671 (1994) (plurality opinion) (“[T]he government as employer indeed has far broader powers than does the government as sovereign”). Government employers, like private employers, need a significant degree of control over their employees’ words and actions; without it, there would be little chance for the efficient provision of public services. Cf. Connick, supra, at 143 (“[G]overnment offices could not function if every employment decision became a constitutional matter”). Public employees, moreover, often occupy trusted positions in society. When they speak out, they can express views that contravene governmental policies or impair the proper performance of governmental functions.

At the same time, the Court has recognized that a citizen who works for the government is nonetheless a citizen. The First Amendment limits the ability of a public employer to leverage the employment relationship to restrict, incidentally or intentionally, the liberties employees enjoy in their capacities as private citizens. See Perry v. Sindermann, 408 U. S. 593, 597 (1972) . So long as employees are speaking as citizens about matters of public concern, they must face only those speech restrictions that are necessary for their employers to operate efficiently and effectively. See, e.g., Connick, supra, at 147 (“Our responsibility is to ensure that citizens are not deprived of fundamental rights by virtue of working for the government”)...

Ceballos did not act as a citizen when he went about conducting his daily professional activities, such as supervising attorneys, investigating charges, and preparing filings. In the same way he did not speak as a citizen by writing a memo that addressed the proper disposition of a pending criminal case. When he went to work and performed the tasks he was paid to perform, Ceballos acted as a government employee. The fact that his duties sometimes required him to speak or write does not mean his supervisors were prohibited from evaluating his performance...

We reject ... the notion that the First Amendment shields from discipline the expressions employees make pursuant to their professional duties. Our precedents do not support the existence of a constitutional cause of action behind every statement a public employee makes in the course of doing his or her job.


"We reject the notion that the First Amendment shields from discipline the expressions employees make pursuant to their professional duties."

The lawful and proper discipline here is incarceration until the offender decides to no longer be in Contempt. She holds the cell door key in her own hands. 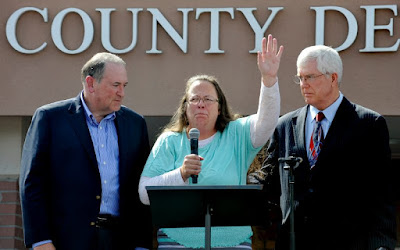 Kim Davis is campaign and marketing a tool of presidential candidate Mike Huckabee (above, left) and lawyer Mat Staver (above, right) of the 501(c)(3) "charitable non-profit" "Liberty Counsel." Staver appeared onstage with Huckabee on Sept 8th at Davis's jail release party during which Huckabee explicitly promoted his candidacy. That is a direct violation of IRS 501(c)(3) restrictions. That it used the conflated cover of Liberty Counsel's "pro bono legal services" accorded the anti-marriage equality scofflaw Kim Davis matters not one whit.

Liberty Counsel is located in Orlando, FL. Its two lawyer Principals are Staver (Chairman) and his wife Anita (President). They call their neat-o little family business a "Christian Ministry."

From their "About Us" web page:

"Recognized by the IRS as a 501(c)(3) organization, this Christian ministry is funded by tax-deductible donations from concerned individuals, churches, businesses, foundations and other organizations."

Last year they paid themselves $317,087 in direct compensation (plus expenses, we can be sure). Of the roughly $4.1 million in gross revenue (from "contributions and grants"), they list about $1.3 million in "salaries and benefits," and ~$2.5 million in "other expenses. They list a number of "independent contractors" to to whom they paid about $1.6 million. I will be looking into whether they have any financial stake in those.

This is a money laundromat. 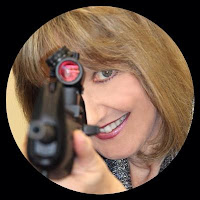 Anita Staver. The Twitter avatar of Liberty Counsel President and wife of Founder and Chairman Mat Staver. How tasteful and  "Christian."

Liberty Counsel supports barring people from the military on the basis of "homosexual activity." Liberty Counsel opposes efforts to prohibit employment discrimination against gay workers. The organization further opposes 'the addition of "sexual orientation," "gender identity" or similar provisions' to hate crimes legislation. In 2005 the Southern Poverty Law Center listed the Liberty Counsel as one of twelve groups comprising an "anti-gay crusade" and in April 2014 added the Liberty Counsel to its list of active anti-gay hate groups. Liberty Counsel also devotes its time to fighting against same-sex marriage, civil unions, and adoption by gay people.