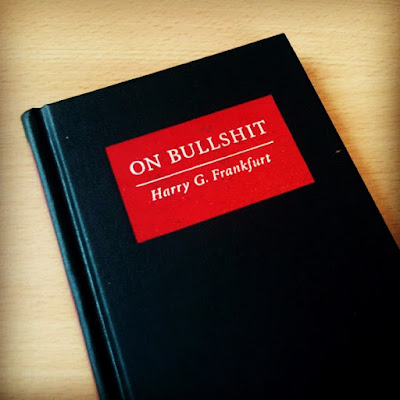 "Someone who lies and someone who tells the truth are playing on opposite sides, so to speak, in the same game. Each responds to the facts as he understands them, although the response of the one is guided by the authority of the truth, while the response of the other defies that authority and refuses to meet its demands. The bullshitter ignores these demands altogether. He does not reject the authority of the truth, as the liar does, and oppose himself to it. He pays no attention to it at all. By virtue of this, bullshit is a greater enemy of the truth than lies are...

Why is there so much bullshit? Of course it is impossible to be sure that there is relatively more of it nowadays than at other times. There is more communication of all kinds in our time than ever before, but the proportion that is bullshit may not have increased. Without assuming that the incidence of bullshit is actually greater now, I will mention a few considerations that help to account for the fact that it is currently so great. Bullshit is unavoidable whenever circumstances require someone to talk without knowing what he is talking about. Thus the production of bullshit is stimulated whenever a person’s obligations or opportunities to speak about some topic exceed his knowledge of the facts that are relevant to that topic. This discrepancy is common in public life, where people are frequently impelled—whether by their own propensities or by the demands of others—to speak extensively about matters of which they are to some degree ignorant. Closely related instances arise from the widespread conviction that it is the responsibility of a citizen in a democracy to have opinions about everything, or at least everything that pertains to the conduct of his country’s affairs. The lack of any significant connection between a person’s opinions and his apprehension of reality will be even more severe, needless to say, for someone who believes it his responsibility, as a conscientious moral agent, to evaluate events and conditions in all parts of the world…

The contemporary proliferation of bullshit also has deeper sources, in various forms of skepticism which deny that we can have any reliable access to an objective reality, and which therefore reject the possibility of knowing how things truly are. These “antirealist” doctrines undermine confidence in the value of disinterested efforts to determine what is true and what is false, and even in the intelligibility of the notion of objective inquiry. One response to this loss of confidence has been a retreat from the discipline required by dedication to the ideal of correctness to a quite different sort of discipline, which is imposed by pursuit of an alternative ideal of sincerity. Rather than seeking primarily to arrive at accurate representations of a common world, the individual turns toward trying to provide honest representations of himself. Convinced that reality has no inherent nature, which he might hope to identify as the truth about things, he devotes himself to being true to his own nature. It is as though he decides that since it makes no sense to try to be true to the facts, he must therefore try instead to be true to himself." 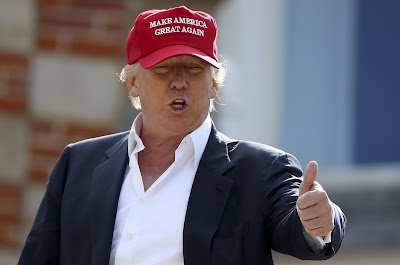 "The bullshitter ignores these demands altogether. He does not reject the authority of the truth, as the liar does, and oppose himself to it. He pays no attention to it at all. By virtue of this, bullshit is a greater enemy of the truth than lies are."

Mr. Trump has attracted the nominal support of millions of frustrated, angry people for whom logical consistency, adherence to facts (and the difficulties involved in accurately discerning them), and acknowledgement of the complexities of life amid a world population of some seven billion contending people are simply irrelevant relative to their feelings of being left behind by our duplicitous, rapacious Elites. His brash confidence, putative "sincerity," and visible, garish evidence of "success" are all that matter.


No one pushes Trump around, and no insult goes unanswered. He fights back. He is not cautious or fearful of offending a critic or any of America’s adversaries. In this, Trump has a personality type that’s common to the charismatic leaders who emerge in times of turmoil and uncertainty, when people are ready to follow a strong leader who promises to lead them to greatness. Sigmund Freud called people with this personality type “normal narcissists” and he described them as independent and not vulnerable to intimidation, also noting that they have a large amount of aggressive energy and a bias for action. Freud included himself in this group and saw these narcissists as driven to lead and to change the world. Such narcissists can be very charming, and indeed, research has shown most of us like to follow narcissists.

An interesting, albeit troubling year awaits. The current front-runner in the GOP Primary season finds it mature, appropriate, and apparently effective thus far to obsessively use social media and the fawning mainstream media to publicly and crudely lambaste his political opponents and anyone else who dares criticize him, in unabashed adolescent fashion -- deploying the full arsenal of juvie epithets comprising his rhetorical bandiolier. He wears his lecherous misogyny proudly, and never passes up an opportunity to extol himself and his "wealth," while dismissively blowing off those who point up his myriad hypocrisies, inconsistencies, logical contradictions, and outright lies.

He continues to get away with all of it. An interesting year awaits, indeed.


"Convinced that reality has no inherent nature, which he might hope to identify as the truth about things, he devotes himself to being true to his own nature."

sorry, but the essay is somewhat -- BS.
The failure lies in the omission of purpose.
Undirected BS is a godsend in the bar when everyone is bored.
Slanted/directed/biased BS (let's call it BBS) is what Trump is guilty of, and as guilty as hell.
BBS is what starts riots and political movements (none of which will polite).

You might trouble yourself to actually read Dr. Frankfurt's book.

Such analytical trash--it astoundingly misses the point of why people are supporting Mr. Trump. Words, as we have seen over and over and over and over again in political campaigns, are meaningless. Trump supporters have stopped playing that game. They see what Mr. Trump has done and they see he can do it for the country--and them. Mr. Trump could shave his head at this point and wear aluminum foil around his ankles and people would still vote for him--because Mr. Trump will ACTUALLY DO SOMETHING positive for the country, not just spout empty words. Get it? Good.

And Trump provides dispositive evidence of the truth of that (see below). He can simply spew brazen, incoherent bullshit, contradicting himself from one day to the next, and his supporter will love him just the same because of his putative "sincerity" and garish "success." "What he has done" is irrelevant to having what it takes to be a responsible and constructive world leader.

When he does amble off into "answering" a policy question, it can be painful to witness. e.g., Trump on Iranian nukes (verbatim, video at C-SPAN):

"Look, having nuclear—my uncle was a great professor and scientist and engineer, Dr. John Trump at MIT; good genes, very good genes, OK, very smart, the Wharton School of Finance, very good, very smart—you know, if you’re a conservative Republican, if I were a liberal, if, like, OK, if I ran as a liberal Democrat, they would say I'm one of the smartest people anywhere in the world—it’s true!—but when you're a conservative Republican they try—oh, do they do a number—that’s why I always start off: Went to Wharton, was a good student, went there, went there, did this, built a fortune—you know I have to give my like credentials all the time, because we’re a little disadvantaged—but you look at the nuclear deal, the thing that really bothers me—it would have been so easy, and it’s not as important as these lives are (nuclear is powerful; my uncle explained that to me many, many years ago, the power and that was 35 years ago; he would explain the power of what's going to happen and he was right—who would have thought?), but when you look at what's going on with the four prisoners—now it used to be three, now it’s four—but when it was three and even now, I would have said it's all in the messenger; fellas, and it is fellas because, you know, they don't, they haven’t figured that the women are smarter right now than the men, so, you know, it’s gonna take them about another 150 years—but the Persians are great negotiators, the Iranians are great negotiators, so, and they, they just killed, they just killed us."

No, "anonymous," I'm precisely on point.

What an incredible read! Thank you Bobby G.
Sharing this link TODAY.